The Farcited group are not really part of Bristol Rural Branch, but as the greater number of the members live  and are members of the branch, it is probably not wrong to include information about  the group in the rural branch web pages. 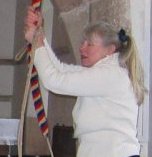 The group was formed in  1990 by a Rural Branch member Arthur Herbert left and above. His aim was to get together the retired members of the branch for ringing in mid week, the objective being to  ring, have a cup of tea  and have a relaxing afternoon with one's ringing friends.
From its humble beginnings  it now has about seventy members who come from as far afield as Wotton-under Edge, Forest Branch Swindon and Bridgwater. The average attendance for a first Thursday in the month 14.30 - 16.00 is twenty. It not only meets now on a Thursday, but about every three months it spreads its wings and visits a tower in the morning, a pub lunch and a further tower in the afternoon. It also has two major outings a year, the famous 'Arthur's mystery tour' which is  no longer a mystery.
It also has a Christmas outing, when on the first Thursday in December we ring at two towers in the morning, a long and leisurely  Christmas lunch in a suitable hotel. In recent years these have been at Morton in Marsh, Wells, Stow on the Wold, Taunton, Chippenham, Salisbury, Cardiff, Exeter, Worcester, Hereford (2003) Evesham(2004) Oxford (2005).     Watch this space.
In 1995 Mary York (picture above) took over from Arthur as (he thought he had organised it long enough) to organise the Farcited group on a monthly basis, in August 2005 after ten years she arranged her last regular Farcited event and Wynne Holcombe (above)  took over the task of arranging the monthly meetings and events. In September 2006 Wynne for personnel reasons gave up the organisation and Ruth and Eddy Welch have taken it on.
Now once again in 2014 Mary and Tony York have risen to the challenge, starting in May they will be organising the monthly towers again, but I hope we do not have to organise it for 10 years as last time.

You can see a full program of the Farcited activities by clicking on the boxes above. If you are a ringer and would like to visit or join the group do send an email for details, or just look at the programme below and turn up having confirmed the venue has not changed.
Below are a few pictures from the Farcited's day out in the Brendon Hills.
There is some ringing between eating and drinking? 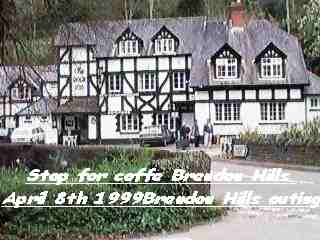 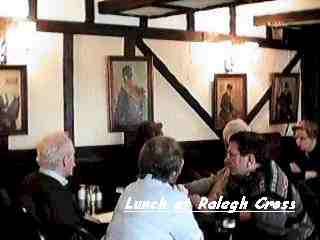 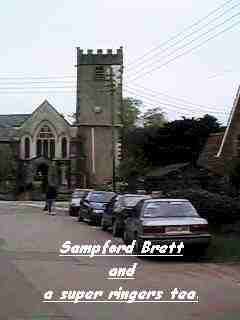